Eddie is the shipboard computer on the Heart of Gold.

Eddie is introduced early on in the Hitchhiker's story, when Arthur Dent and Ford Prefect encounter him on board the Heart of Gold starship, piloted by Trillian and Zaphod Beeblebrox.

Eddie controls and permeates the whole of the Heart of Gold. He can manipulate navigation, defence, weapons, shielding, the Improbability Drive, escape pods, airlocks, and various other systems. He is capable of carrying on conversations with the crew, as well as talking with other computers aboard the ship such as doors and Nutri-Matic food and drink systems. He records everything he says on a ticker tape.

He has a massive computer memory but it is capable of being filled with exceptionally large requests (such as, for example, why someone would like tea). The semi-official Eoin Colfer novel And Another Thing... has Eddie replaced by Zaphod's detached second head, hereafter referred to as Left Brain. He is shown to be more competent and causes fewer accidents than Eddie (having been Zaphod's smarter head), but can still be overtaxed and frozen.

Eddie is equipped with a GPP, or Genuine People Personality. It is described as being "brash and cheery as if it was selling detergent." He is consistently overly cheerful, even when the ship and its crew are in danger.

Eddie has a backup personality as well, which doesn't do much toward making the computer less irritating. This alternative personality has its own voice and concerns; a motherly personality who cajoles, and berates and acts protectively to encourage cooperation and safety among the ship's occupants. Whatever personality he takes on, however, he is thoroughly loathed by Ford, Trillian, Arthur, Marvin and Zaphod.

Later in the series, he is shown to get sarcastic and dry when aggravated or overtaxed. 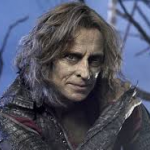