View source
watch 02:56
Doctor Strange in The Multiverse o Madness - The Loop
Do you like this video?
Play Sound

“Your Plastic Pal Who's Fun To Be With!"”
—The Sirius Cybernetics Corporation description of a robot with GPP

in the radio show he says "goodbye" and his lights close down, meaning marvin is no more

Marvin, more fully known as Marvin the Paranoid Android, is an incredibly brilliant but overwhelmingly depressed robot manufactured by the Sirius Cybernetics Corporation and unwilling servant to the crew of the Heart of Gold. 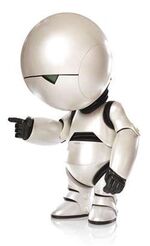 In the novels, Marvin is described thusly: "...though it was beautifully constructed and polished it looked somehow as if the various parts of its more or less humanoid body didn't quite fit properly. In fact, they fit perfectly well, but something in its bearing suggested that they might have fitted better."

On the radio show, there's no physical description of Marvin, though his voice is digitally altered to sound more robotic, and any scene that focuses on him is accompanied by sounds of mechanical clanking and hissing.

In the TV series, Marvin is built in the style of a 1950's robot similar to Robbie the Robot from Forbidden Planet or Twiki from Buck Rogers. His body is blocky and angular, with a pair of clamp-claw hands, shuffling feet and a squarish head with a dour face.

In the movie, Marvin is a short, stout robot built of smooth, white plastic. His arms are much longer than his legs, and his head is a massive sphere with only a pair of triangle eyes for a face. His large head and simian-like proportions give Marvin a perpetual slouch, adding to his melancholy personality. At the start of the film his eyes glow, but at the end he is shot but unharmed, leaving a hole in his head and dimming his eyes. This is probably the most depressing and unacceptable manifestation of Marvin ever conceived, and thus paradoxically the most accurate.

Marvin the robot has a prototype version of the Genuine People Personality (GPP) software from SCC, allowing him sentience and the ability to feel emotions and develop a personality. He's also incredibly smart, having a "brain the size of a planet" capable of computing extremely complex mathematics, as well as solving difficult problems and operating high-tech devices.

However, despite being so smart, Marvin is typically made to perform menial tasks and labour such as escorting people, opening doors, picking up pieces of paper, and other tasks well beneath his skills. Even extremely hard tasks, such as computing for the vast Krikkit robot army, are trivial for Marvin. All this leaves him extremely bored, frustrated, and overwhelmingly depressed. Because of this, all modern GPP-capable machines, such as Eddie the computer and the Heart of Gold's automatic doors, are programmed to be extremely cheerful and happy, much to Marvin's disgust.

Marvin hates everyone and everything he comes into contact with, having no respect for anybody and will criticise and insult others at any opportunity, or otherwise rant and complain for hours on end about his own problems, such as the terrible pain he suffers in all the diodes down his left side. His contempt for everyone is often justified, as almost every person he comes across, even those who consider him a friend, (such as Arthur and Trillian, who treat him more kindly than Ford and Zaphod) treat Marvin as an expendable servant, even sending him to his death more than once (such as when Zaphod ordered Marvin to fight the gigantic, heavy-duty Frogstar Scout Robot Class D so he could escape). Being a robot, he still does what he's told (he won't enjoy it, nor will he let you forget it, but he'll do it anyway), though he'd much rather sulk in a corner by himself.

Several times in the series Marvin ends up alone and isolated for extremely long periods of time, sometimes spanning millions of years, either by sheer bad luck (such as the explosion that propelled everyone but Marvin to Milliways in the far-off future) or because his unpleasantly depressing personality drives them away or, in more than one case, makes them commit suicide. In his spare time (which he has a lot of), Marvin will attempt to occupy himself by composing songs and writing poetry. Of course, none of them are particularly cheerful, or even that good. 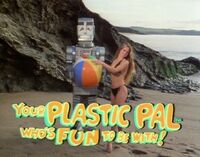 By the end of So Long, And Thanks For All The Fish, Marvin ends up on planet Preliumtarn, where he meets Arthur and Fenchurch for the last time. Multiple instances of time travel shenanigans have left Marvin no less than thirty-seven times older than the universe itself. His various body parts, now rusted and barely functional, have been replaced at least fifty times each (except, ironically, all the diodes down his left side). With Arthur and Fenchurch's help, Marvin arrives at the mountain where God's final message to the universe was written: "We Apologise for the Inconvenience." After reading this, Marvin remarks "I think I feel good about it," and finally dies.

In the movie, Marvin is shot by the Vogons but remains functioning despite that his eyes no longer glow and there is an enormous hole in the back of his head. He then proceeds to shoot the Vogons with the Point of View gun, leaving them depressed and unable to fight. They are then piled into a van and driven away. Marvin never dies in the film version.

How I Hate the Night, also known as Marvin's Lullaby, is "a short dolorous ditty of no tone, or indeed tune."[2]

Community content is available under CC-BY-SA unless otherwise noted.
Advertisement