Nestling quietly on top of the towel in Ford Prefect's satchel, the Sub-Etha Sens-O-Matic began to wink more quickly.From The Hitchhiker's Guide to the Galaxy

The Sub-Etha Sens-O-Matic is a device that alerts hitchhikers to passing spacecraft, by monitoring ships' Sub-Etha signals.

At the start of the story, Ford Prefect uses this device to learn that the Vogons are on their way to demolish the Earth. Along with his towel, it was one of the permanent contents of Ford's satchel, generally buried under a pile of scripts, to help maintain his cover as an out-of-work actor. It was, of course, light years beyond any Earth technology of the period.

This device is only described as being small and black and must be small enough to fit into Ford's satchel. It is possibly of a size that is able to fit in one's hand, similar to the Electronic Thumb. Unlike many of the other pieces of technology in the series, the Sens-O-Matic doesn't appear in the television series or film adaption, so there is no visual adaption. 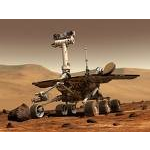